the basics of Celiac Disease

What is celiac disease?

Celiac disease is a disorder that affects the gut or small intestine. When a person with Celiac eats gluten-containing food like bread, pasta, crackers, and cake, they get sick because those foods have gluten, which is a tiny protein in wheat, barley, and rye. There are more than 200 known symptoms of Celiac which range widely beyond digestive issues. For people with Celiac, gluten damages the inside lining of the small intestine, making it harder to absorb crucial vitamins and nutrients. If left undiagnosed, Celiac could lead to malnutrition and other health problems such as infertility or bone weakening.

How is Celiac treated? 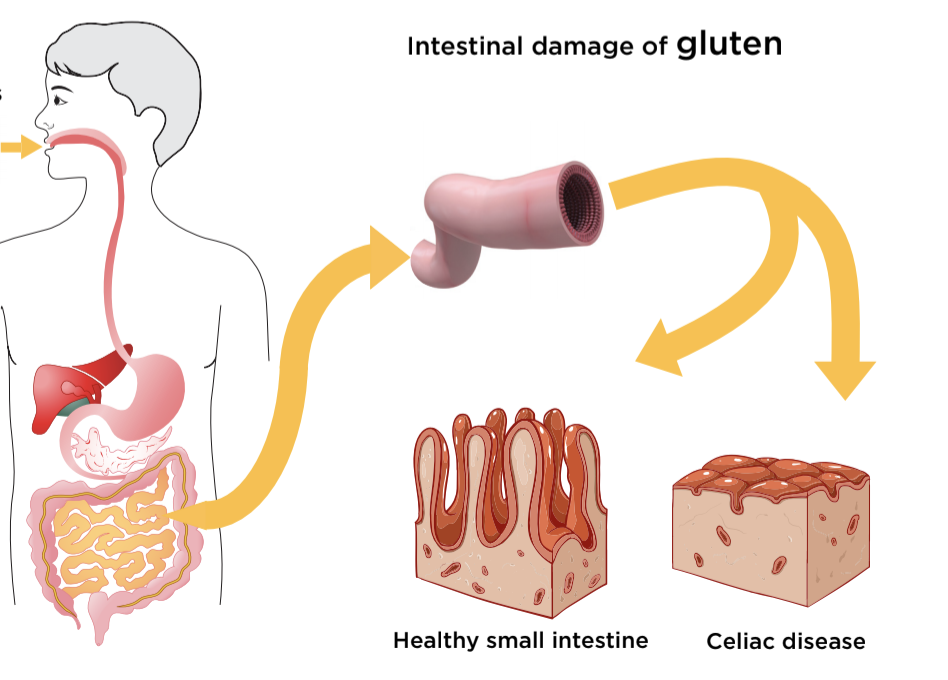 Gluten is a type of protein found in wheat, rye, and barley grains, as well as in hybrids of these grains. Even the very smallest trace amount of gluten can trigger Celiac disease in some children. Some people have mild physical symptoms or none, while others have more severe physical symptoms. Regardless of any visible symptoms, people with Celiac Disease who consume any amount of gluten will experience the same intestinal damage.

Where Is Gluten Found?

Wheat (and wheat varieties) is the most obvious source of gluten in our U.S. diet. But wheat-free does not mean the same as gluten-free. There are other gluten-containing grains. Wheat, rye, and barley contain gluten protein and are all used to make foods like bread, pizza, pasta, cake, and cookies. Many other foods may contain hidden gluten ingredients that are less obvious. 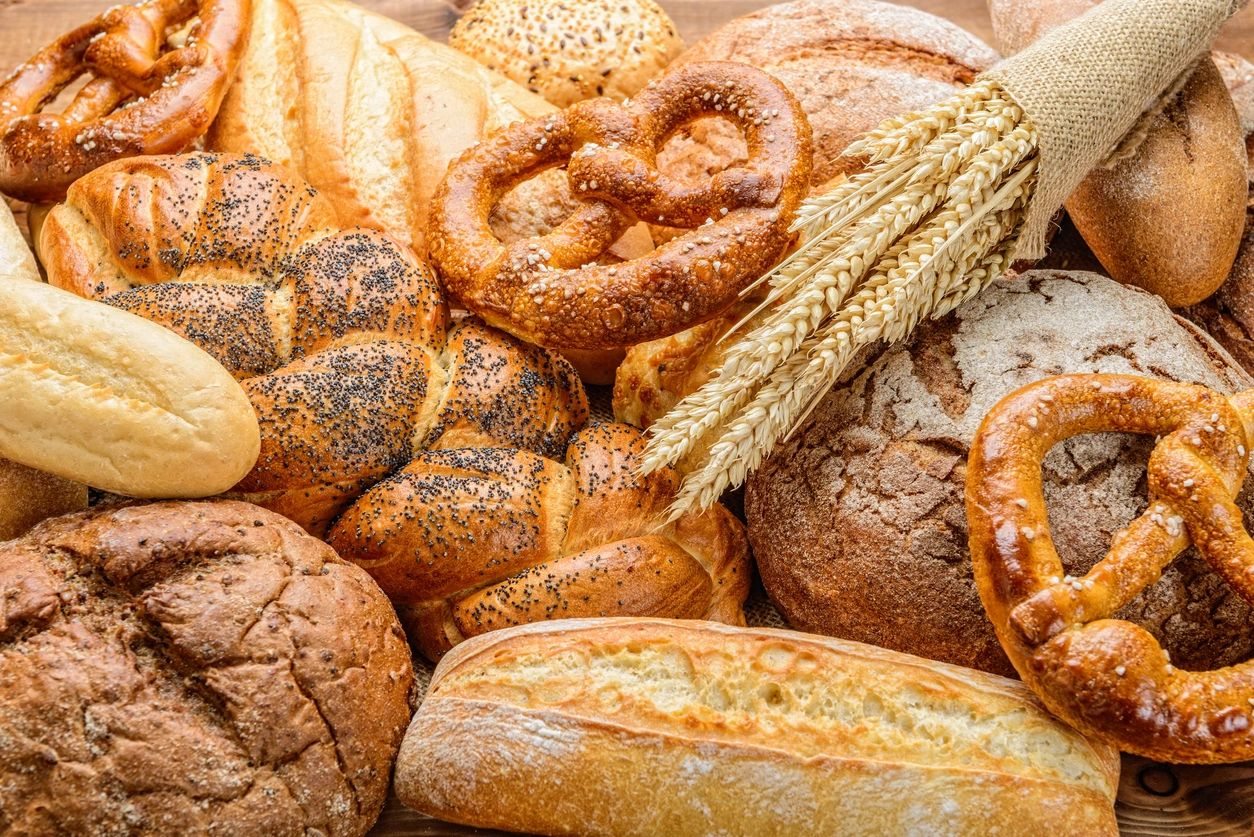 *Unless there is a special label stating these ingredients are gluten-free they are known to contain gluten and should be avoided.

Gluten may be hidden in unexpected places, for example, in soups, sauces, gravies, chocolates, candy, teas, imitation meats, and deli meats. Review all food ingredients in advance, even if they seem like they would be safe.

Do oats have gluten?

Though a grain, oats do not contain the type of gluten protein that is harmful to people with Celiac disease. However, they are often milled, processed, or grown in the same fields as wheat, barley, or rye which leads to cross-contact of the oats. Some oats are grown in special ways or are sorted and tested to confirm they have no hidden gluten; these oats will always be labeled to be gluten-free, and are safe to consume. 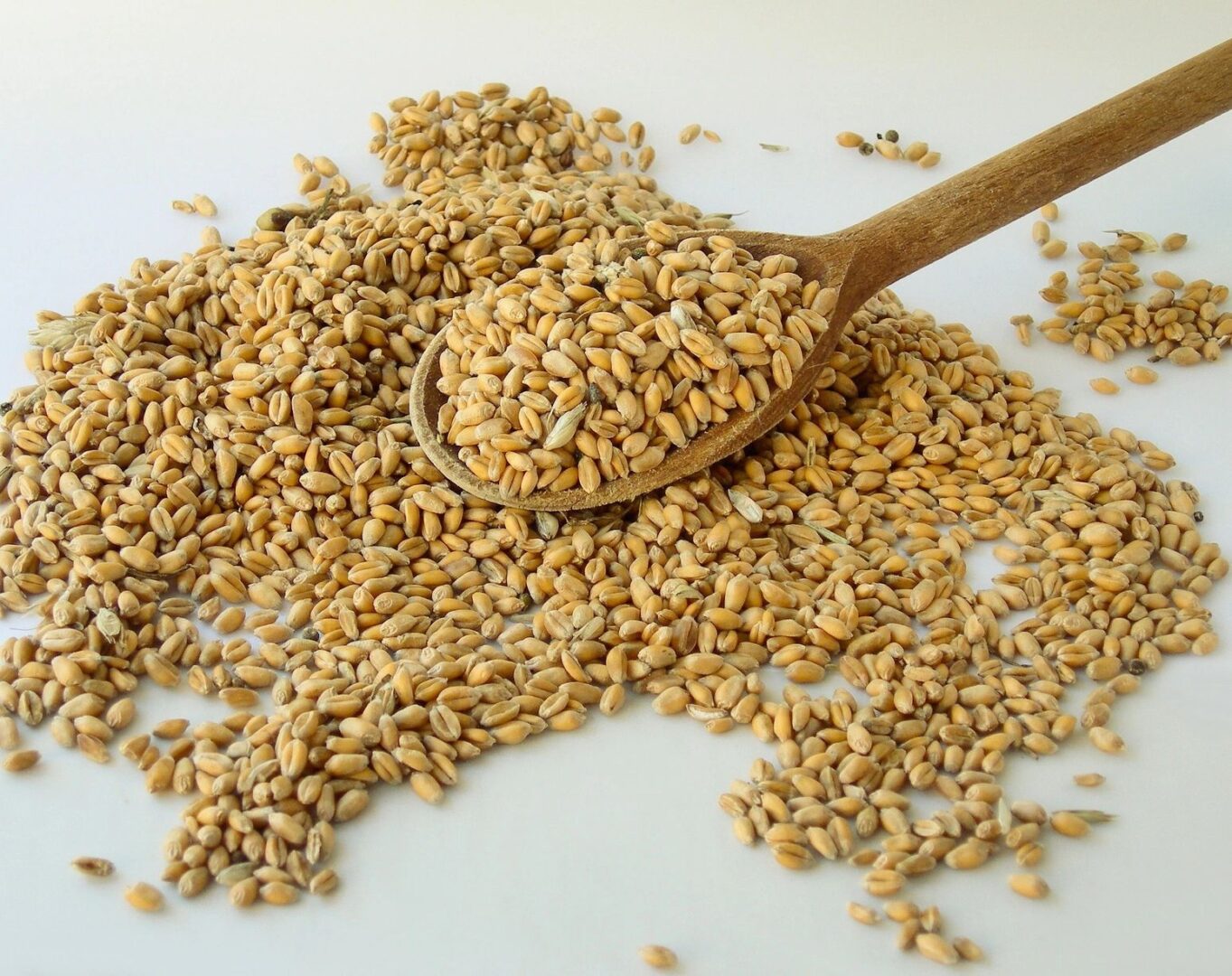 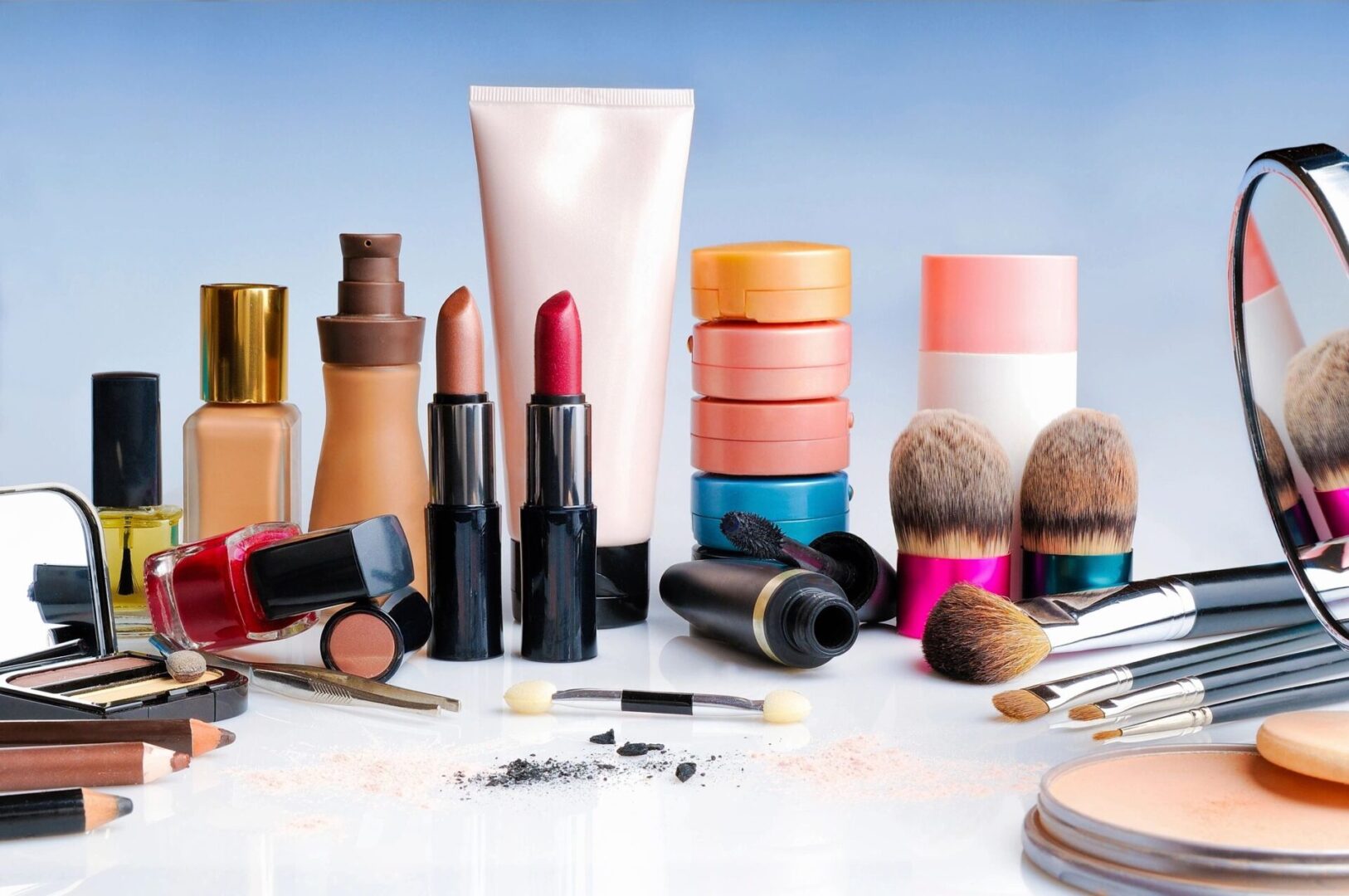 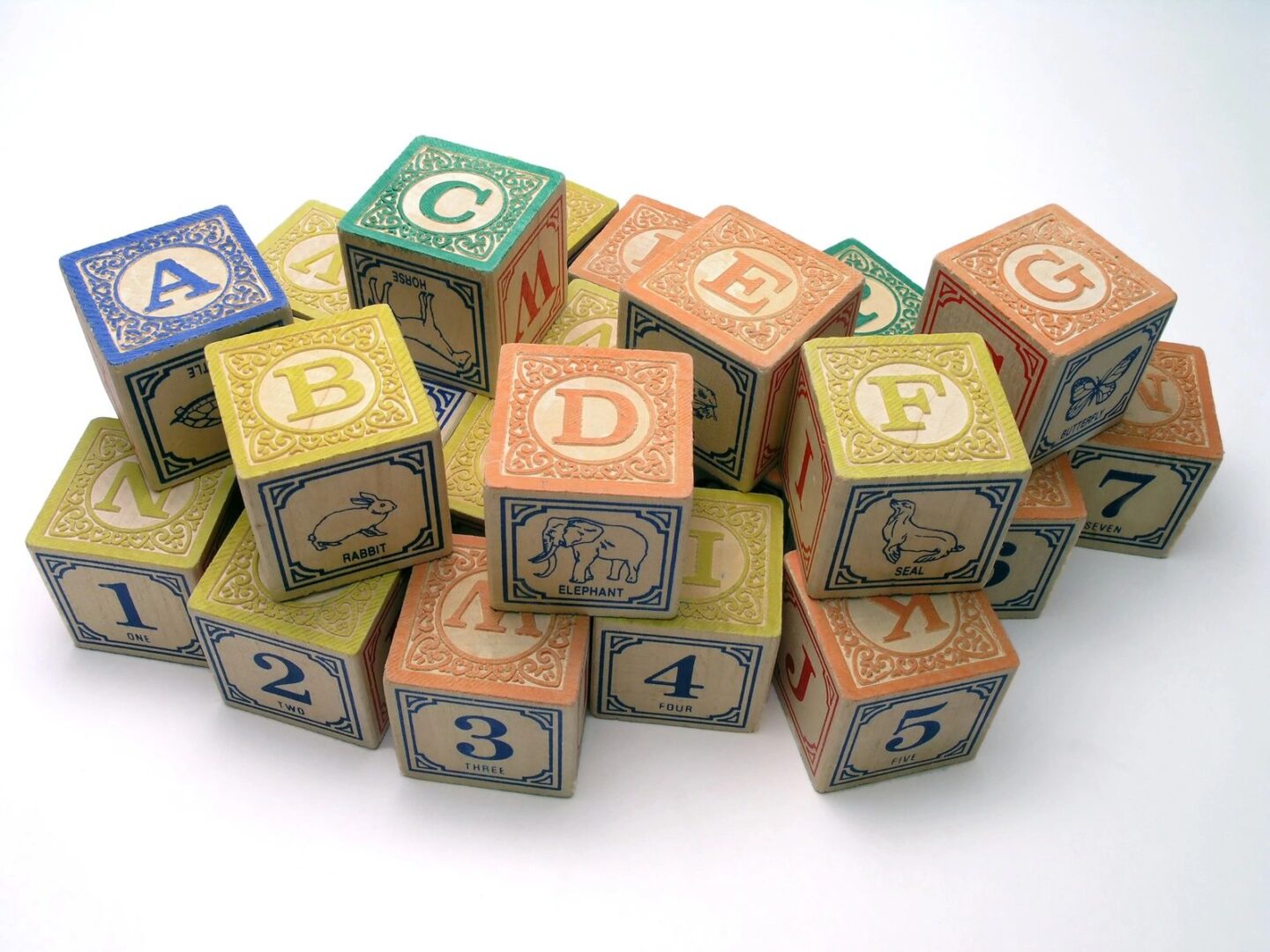 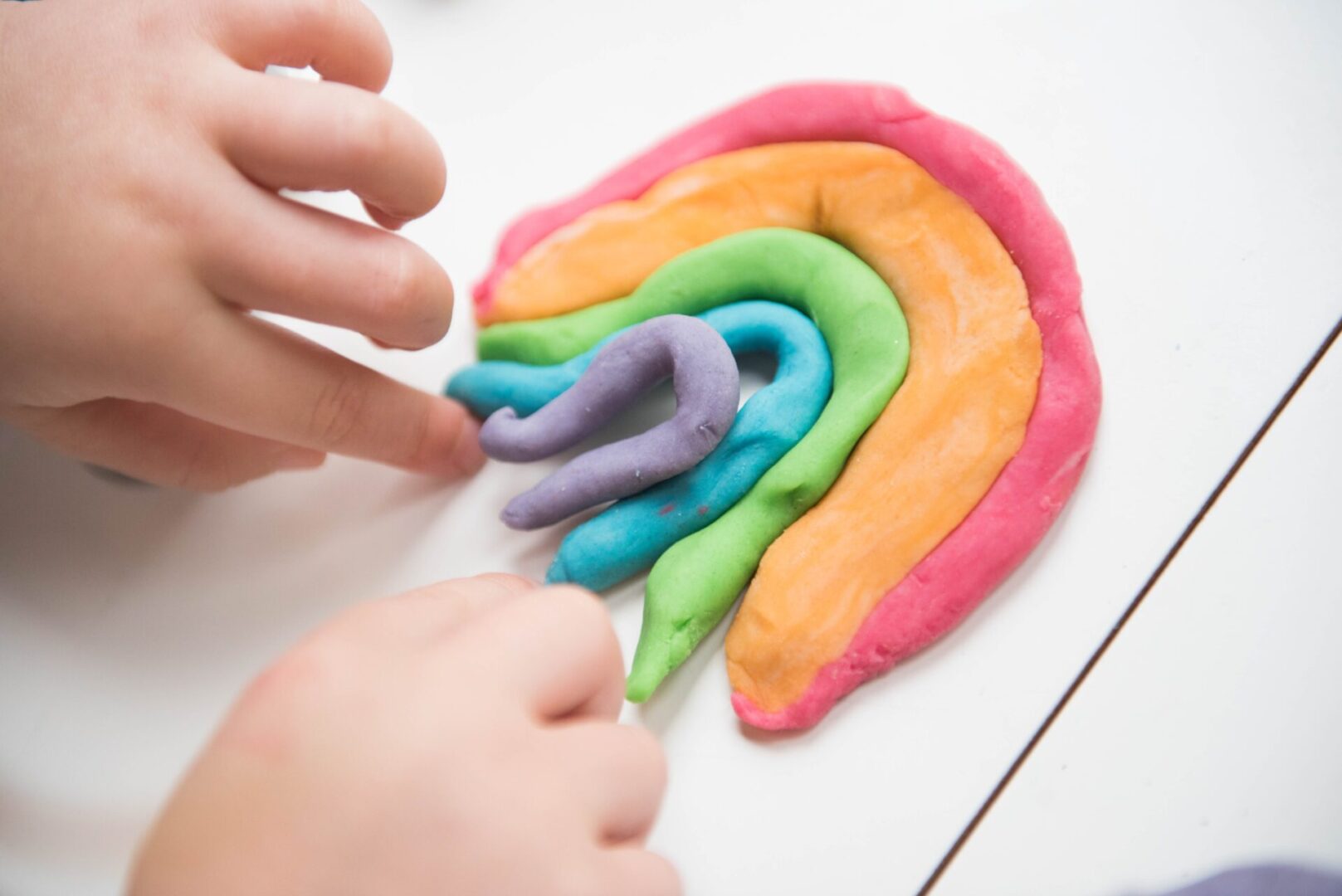 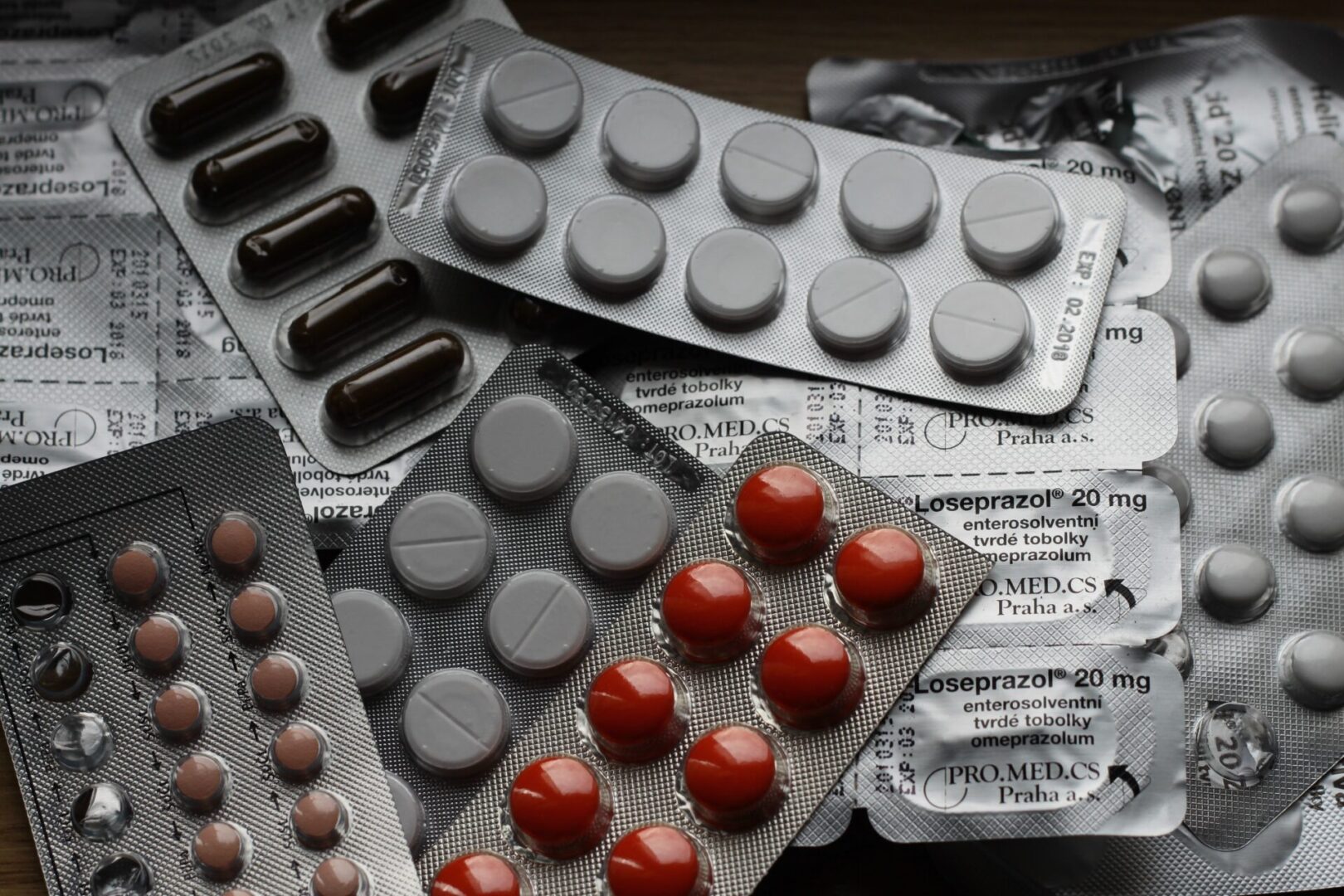 Cosmetics: Makeup, lipstick, chapsticks, and lotions can have gluten as part of their ingredients.

Craft supplies: Toys and crafts like modeling clay and doughs and some pastes contain gluten ingredients.

Medicines: Both prescription and over-the-counter medicines or vitamins can sometimes contain gluten. Most often the gluten is found in the fillers that are used to help form a capsule or tablet. Some of these fillers are made from wheat. Always check with your pharmacist or the manufacturer of a medicine or supplement before you take it to confirm that it is gluten-free. Another resource is the website: glutenfreedrugs.com

Common gluten-free medicines That are Safe to Consume

*These medicines were gluten-free as of April 2017. Be aware that ingredients may change at any time, and that global ingredients often vary from country to country. 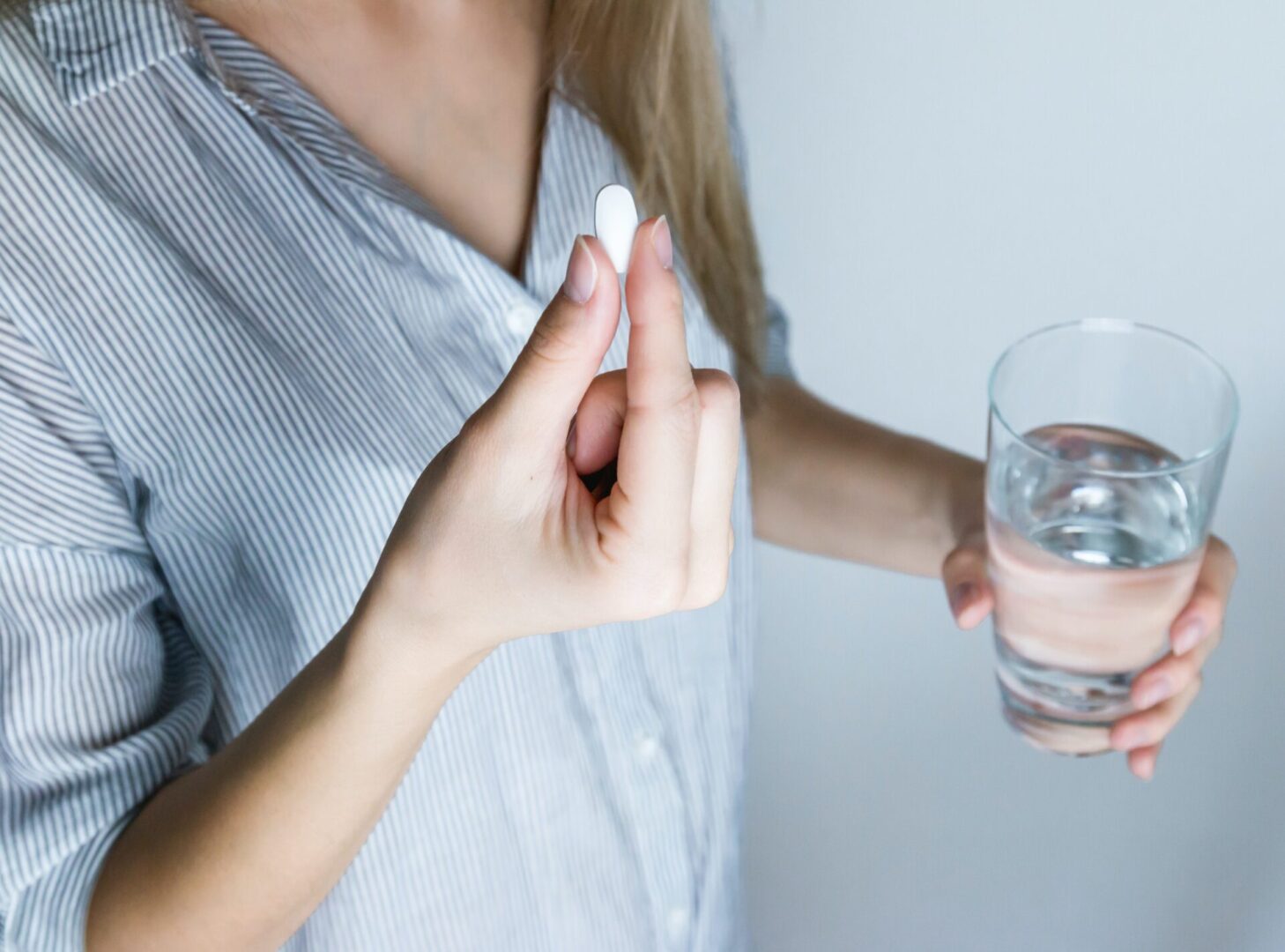 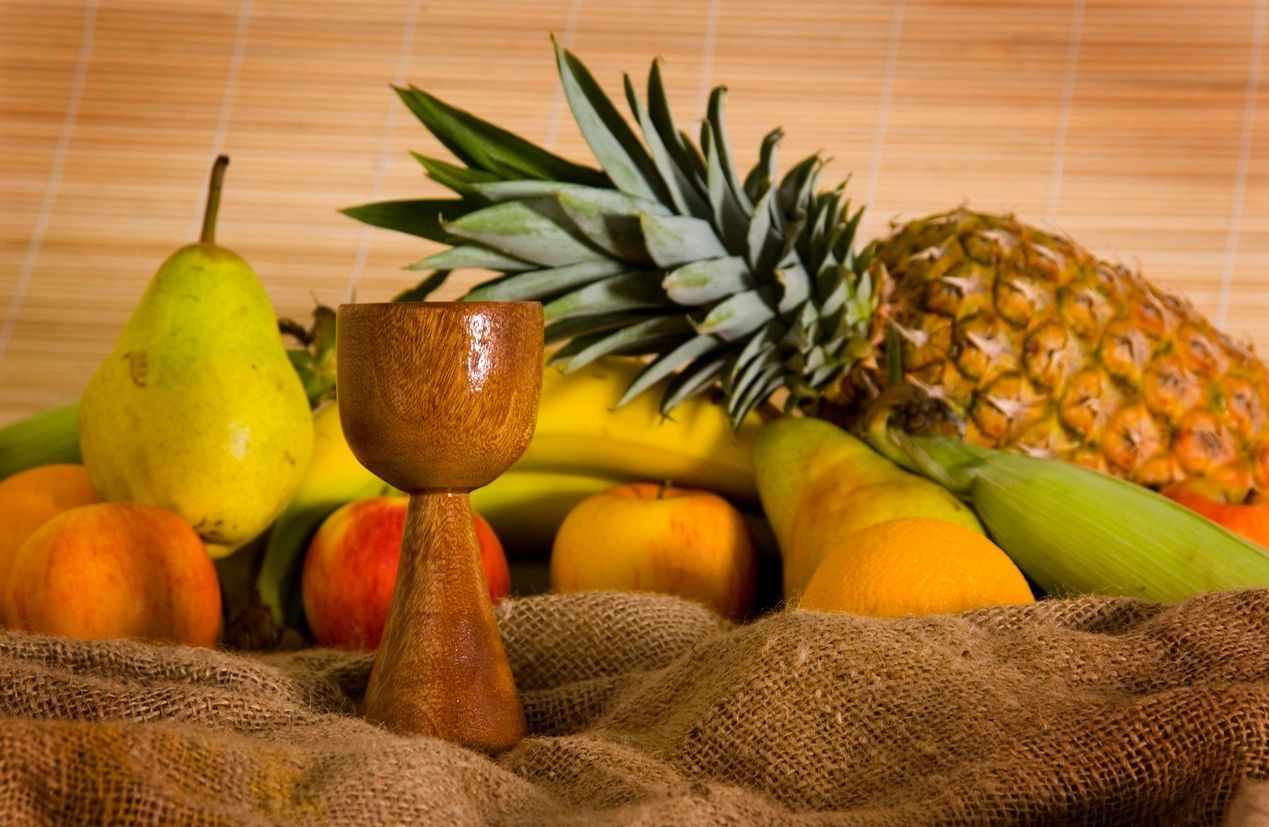 Q. Should I avoid foods that are made in the same factory or on the same equipment as gluten-foods?

A. All manufacturers are required to follow safe practices and to clean equipment well in order to prevent products from getting mixed together.

Use your gluten-free label reading skills to determine if the food is gluten-free or contains gluten ingredients. These foods still may be safe to eat!

To determine if there is a risk for cross-contact, you may want to contact the manufacturer and ask what steps they take to prevent cross-contact in their factor or how they test their product for gluten.

Q. What if I have accidentally eaten gluten?

A. Unfortunately there are no medicines or supplements that a person with Celiac disease can take that will help your body recover more quickly after being exposed to gluten. Drink a glass or two of water to stay hydrated even if you do not feel like eating very much or have belly pain.

You might also keep a log of accidental exposures or unexpected products with gluten for family, friends, babysitters, etc. in the future.

Q. I’ve heard about gluten-digesting enzymes. Should I take these?

A. No. There is no benefit to take these enzymes. They will not help the body tolerate gluten. These supplements do not work in treating Celiac disease, nor for help, if you accidentally eat something with gluten. We do not recommend these supplements.

Q. Is it safe to purchase food from bulk bins?

A. No. Foods in bulk containers are frequently cross-contaminated from shared scoops. It is not recommended to consume any food from a bulk section if you are following a gluten-free diet for Celiac disease.

Q. I’ve heard that (blank ingredient) is gluten-free and safe. Is this true?

A. There are a lot of ingredients that you may see listed on a food label that you might not recognize. Below is a list of frequently confused ingredients and their gluten status.

Q. Why should I see a gastroenterologist and not an allergist?

Read the labels on packaged food every time before you buy it, even if it is something that you have purchased before. Reading the labels is the best way to determine if a food is gluten-free and safe. If it is not labeled as gluten-free, you can’t find the ingredients anywhere, or are unclear if it contains gluten follow this advice from the Celiac Foundation: “If in doubt – go without” and don’t eat it. 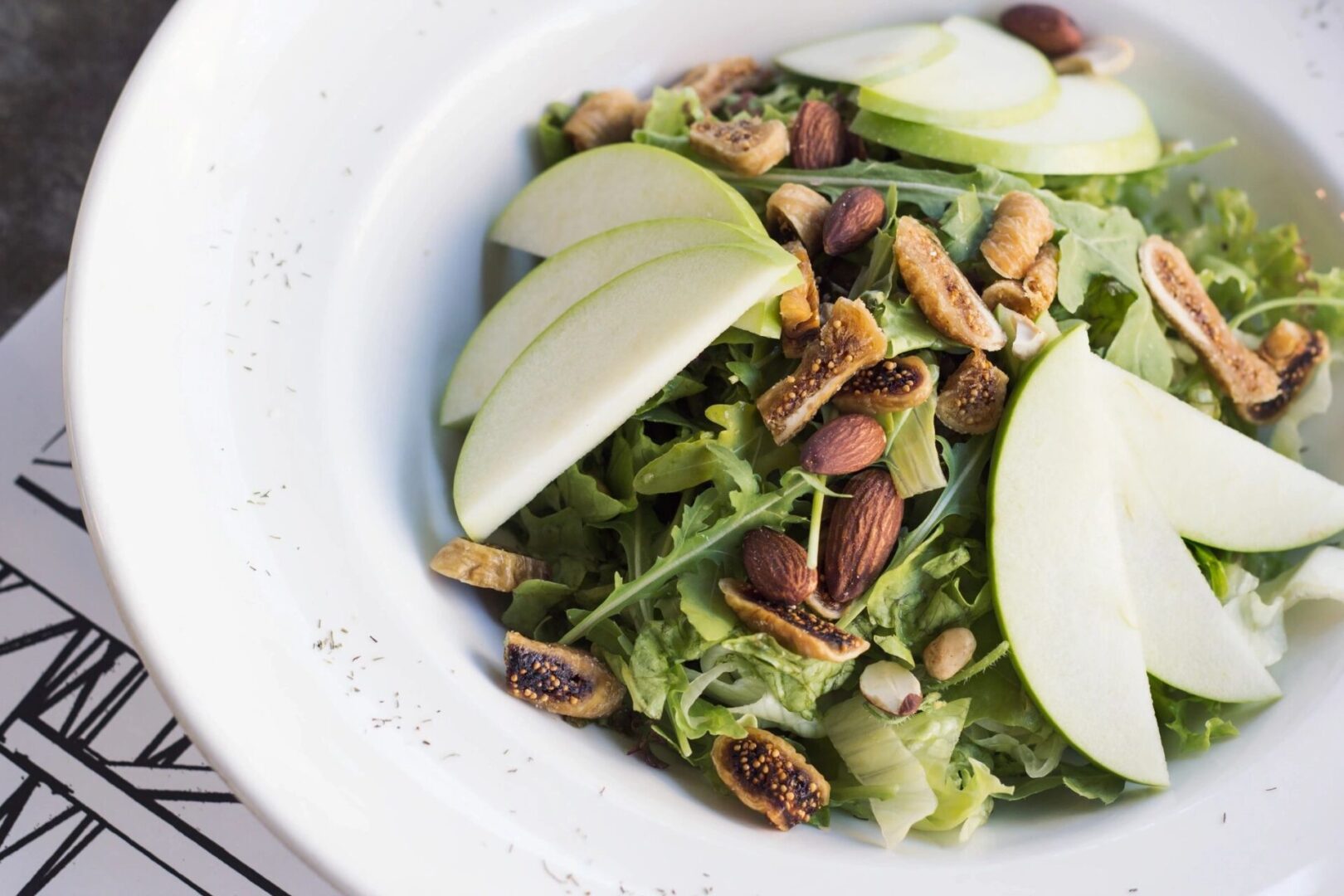 There Are 3 Steps To Look at a Food Package To Check a Food for Gluten.

1. Look for a Certified Gluten-Free logo. These foods are considered safe for those with celiac disease.

2. Look for other gluten-free labels on the package

Most foods with gluten-free labels are safe for those with celiac disease. The words gluten-free could be anywhere on the package, though most often on the front. Ask your dietitian or medical provider about any foods that are known to be at risk for containing gluten even though they are labeled gluten-free.

USDA foods (meat and dairy) are not required to follow the same rules of labeling as packaged food. Most voluntarily do. Manufacturers can use the words “gluten-free,” “no gluten,” or “without gluten.”

Review the list of ingredients for the following 6 words. If a product lists any of these words, it is likely not gluten-free.

Remember that wheat-free is not the same thing as gluten-free.